Since our forefathers plowed their first field, we have looked to the sky and into the stars for guidance. For a time they believed the moon and the stars will have the answers to their questions. For some it was the winds and the elements that brought to them divine guidance and held the promises of bountiful harvests. For others it was spirits and all powerful beings.

Mankind has searched for answers from the moment they could form questions. We have sought to know why we are here and what here is and where is here. We have always relied on faith that our questions will be answered. Faith is needed where fact does not exist. When bad things happened they asked why. When no answers came, they made up their own. Left to their own devices, the answers were often not the best ones.

Faith often turned to fear. Fear that by not honoring or pleasing the stars, or sun or moon or elements would bring bad things upon the people. Should they pay special homage? Give gifts? Build special places to be closer? Sacrifice something special to show their faith? Force all others to see and follow their faith?

Throughout history one has always risen to the top. One that is seen as the leader or savior or simply the one to follow. Sometimes these leaders used their influence to become the one. Sometimes it just happened. Sometimes they just looked up and saw the one.

It was a dark and stormy night. Rain had been pounding for days. The ground was saturated and soggy. The winds whipped through the valley bending trees like grass on the coast. The soil could no longer give refuge to root and the trees groaned as they were pulled from the ground. The roots strained to keep their hold. The young tree struggled to stay upright, its short life threatened to come to an end at any moment. A hooded figure appeared in the darkness. Bearing beams, bolts an cable. The figure began to rescue the tree. Supports were wedged into place. The tree was righted. More supports and finally a cable bolted and secured into nearby pillars, strengthened the tree. The tree dug its roots into the ground and stood firm against the onslaught of the brutal storm.

Two years later the infant tree still held its ground. Leaning slightly towards the west and bearing the scars on its trunk from the night it was rescued. The cables and temporary supports dug into its bark leaving battle scars that wore like medals of courage and bravery. The tree could now hold its own against the storms with their winds and rain. But this year those storms did not threaten the tree. This year a new threat emerged. Something the tree had barely experienced ever before. This year brought a bitter cold that stung and burned the tree. The biting cold clenched its death grip around every leaf and branch. The relentless cold burned the life from every limb. When the cold was done decimating the tree all that was left was a leafless brown tower with no life left to cover the scars of past battles.

As I looked at the hundreds of tortured leaves scattered on the ground below what just a couple days before was a beautiful, green, healthy young avocado tree I felt great sadness and despair. It was just a few short years ago I received the tree from my wife on our seventh anniversary. She found just the right tree. Already nurtured into life for three years. That very year we had tiny avocados struggle unsuccessfully to grow. The next year we had two. Two beautiful, creamy, buttery avocados. The next year we had more than 20. This you tree had found its home and defying every rule, it was giving its fruit with in 5 years. I carefully trimmed the branches and comforted the tree with every snip. The tree was happy and healthy and ready to share bushels of it fruits. But the sixth year it had to burden some hard rains and winds. The tree struggled against the forces and nearly failed. But, in the dark of the night and in pouring rain, I came to its side as anyone would to a member of their family. With the wind whipping in my face and the tree struggling to hold onto the ground, I placed the first support. As the wind momentarily changed, we pushed back. Digging my boots into the soggy turf, I pushed the tree upright and wedged supports. I could see its tender bark ripping as I tried to save it. With the final support in place, I secured bolts into fence posts and wrapped a support cable around the tree. Together we stood in defiance of the storm. The tree survived, we survived.

The next two years were years of repair and strengthening. In the tree's eighth year, its branches were burdened with avocados. This year it was giving its bounty like never imagined. Were were never prepared for the cold. I could do nothing as I watched the cold draw the life from my tree. Every avocado was destroyed. Every leaf killed. Every branch brown and dead. It was months before I could bring myself to trim the dead limbs. When it was done, the once beautiful and green laden with fruit, it was just a trunk barely 8 or 9 feet tall. I left one branch. One limb to hold on to.

Somewhere within the damaged and weakened trunk was a glimmer of life. Dormant and protected, the bud of life began to grow. As it grew, new shoots of green reached out from the trunk. New branches, new limbs, new leaves spawned from the heart of the tree. Slowly it grew and expanded to much bigger than it was before before the cold. Its ninth year was a year of renewing. Its tenth year has been a year of expanding. Each of the last two years I have eagerly examined my friend for new fruit but it has not been so. It tried but the infant avocados didn't survive. The tree has tried so hard to bear fruit again. I comfort it as I prune away the excess. We are happy our friend is beautiful and healthy. It is a joy every time I look into the yard and see it standing there.

Today was a day like any other day. It has been several weeks since I mowed the back lawn. The rains and sun spurred some rapid and healthy growth. As I labored back and forth, cutting the tall grass and cleaning the mowers grass chute, my mind wandered. I thought about the work the yard needed. I thought about our forefathers plowing their first field with crude tools. I wondered why. Why is it? What is it all for? Why have people looked to the sun and stars for answers. I looked up from the base of my tree. There it was. The answer. It was all right there. Suddenly what was impossible to see, I could clearly see. This is what it is all for! 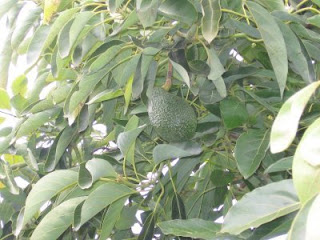 You are soooo funny (and cute to boot). Mmmmm....I can already taste that avacado!