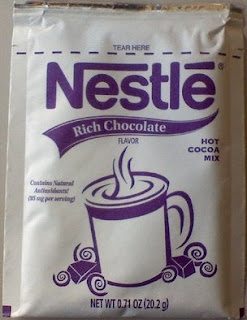 With an image like this, how can I refrain from tearing it open, dumping the silky chocolaty flavoring into a mug and drizzling hot water into it to make a Rich Chocolate (flavor) drink? It takes a lot of self control. Do I have the constitution? Maybe if I distract myself by reading the ingredients and the urge to sip a steamy hot cup will pass.

Let's see what is in this stuff anyway ...

All of the following descriptions come from various web sources and my interpretation. Caveat emptor.

In order listed on the package (we assume this is most to least percentage of total ingredients):

- Sugar: According to the Wikipedia, sugar refers to any monosaccharide or disaccharide. Monosaccharides (also called "simple sugars"), such as glucose, store chemical energy which biological cells convert to other types of energy. So we'll just say this is just like the pure cane stuff grown in Hawaii (but could be from beets for all we know).

- Corn Syrup Solids: According to Thefitshack.com, this is basically sugar from corn but is less sweet than sugar but is still sugar and just as bad as sugar if sugar is bad. This is not High Fructose Corn Syrup.

- Vegetable Oil (partially hydrogenated coconut or palm and hydrogenated soybean): According to Tyson recipes at Tyson.com, these are "oils extracted from any of the following: corn, soybeans, peanuts, cottonseeds, safflower seeds, rape seeds (for canola oil) and sunflower seeds. Pale in color and flavorless, they can be heated to high temperatures." OK, then what is the hydrogenated stuff? As I understand is, they heat the vegetable oil then push hydrogen bubbles into it which will make it thicker. Fully hydrogenated makes it sold and partially hydrogenated makes it softer like butter. This is like butter, which is really good, but it is not butter. It is a cheap way to make something like butter. The process makes trans fats. Trans fats are evil. They can't be broken down like natural fats. According to the nutrition facts, there are less than 1 gram of trans fats but hydrogenated oils makes trans fats. how does that work?

- Dairy Product Solids (from milk): This is a tough one. I had to look around and make my own opinion, YMMV! Basically the process that is used to make something called permeate which is used to make ethanol (gasoline like stuff) can also be made into dairy product solids used in stuff like this. This permeate is not a bad thing. It is just stuff that comes from a filtering process. I think it is funny that it can be used to make milky stuff for hot cocoa mix or ethanol. According to an FDA page, these solids are at least 59% lactose so lactose intolerant folks might poot a lot and be uncomfortable drinking this stuff.

- Cocoa processed with alkali: Apparently Alkali is like acid that reduced the bitterness and alters the color of the cocoa. In bigger doses an alkali is caustic and burns like hell. According to the Wikipedia, cocoa is the died and fully fermented seed of the cacao tree. The bitter tasting seeds are extracted from the pods then let sit in the sun to fully ferment which sweats a liquid which drips away and evaporates. The dried seeds are cocoa beans that are further processed extracting and grinding up the nibs to make chocolaty stuff. Alkali is added when they want to make cocoa power from the liquefied nibs. Nothing bad here unless you think it is gross that in some growing areas people shuffle their feets on the drying seeds to stir them up.

- Cellulose Gum: This is some chemical stuff extracted from "plants" and used to make stuff thicker. According to the Wikipedia and standford.edu, it is used to conserve paper materials, in toothpaste, laxatives, ice cream, paint and hot cocoa mix. Not only does it make stuff thicker but is also reduces foam.

- Sodium Caseinate: According to thefreedictionary.com and other sources, this starts as casein which is "A white, tasteless, odorless protein precipitated from cow's milk by rennin that is the basis of cheese and is used to make plastics, adhesives, paints, and foods". Answers.com further describes this as "formed by dissolving casein in sodium hydroxide and then evaporating. Also known as casein sodium; nutrose". Are we drinking super glue?

- Dipotassium Phosphate: According to the Wikipedia and other sources, this is basically a water-soluble salt used in food and fertilizer. In fertilizers, it is used as a pesticide to kill fungus. Oh, it can also help with headaches.

- Sodium Aluminosilicate: According to the FDA this is a food additive that is added to lots of stuff including vinegar, non-grape wines, Ready-to-eat savouries, Bakery wares , cereal and ,of course hot cocoa mix. The National Institute of Health lists it in paint, primer, room deodorizer and it is a skin and eye irritant. I think it is basically some sort of salt.

- Mono and Diglycerides: According to enabling.org, this is some mix of glycerin and oil heated up to high temps where the glycerin molecules party with the oil particles making some beautiful sweet music. They seem to be here to help with body and consistency by helping things mix that don't want to mix like hot water and oil which is what the cocoa stuff basically is.

- Guar Gum: According to London South bank University, this is a "economical thickener and stabilizer". According to widegeek.com It is derived from some bean plant and is way better at thickening stuff than corn starch is and is way cheaper too. It comes from India and Pakistan.

- Artificial Flavors: According to Howstuffworks.com, this is a bunch of chemicals to add to get aromas and tastes the manufacturer wants us to experience. If I understand Eric Schlosser, these are really the addictive drugs food manufactures use to hook us on their foods by stimulating our brains in ways that give us joy and pleasure.

- Sucralose: According to the International Food Information Counsel, this is a super sugar made from sugar but 600 times as sweet. It somehow bonds to the sweet receptor taste buds and produces a super sweet sensation. It has no calories and is not sugar. It is not a carbohydrate. It is not converted to energy. I simply makes things sweet and passes straight through you. It reduces the need for lots of sugar in the mix even though there is already lots of sugar.

There ya go. Go mix yourself a hot cup of paint, ethanol, room deodorizer, gum thickened fungus killing hot cocoa. I know I am!

In the spirit of openness, I drink Swiss Miss No Sugar Added Instant Hot Cocoa Mix (with tiny marshmallows). At work we have the Nestle mix which I don't think I have ever had.
Posted by Jomebrew at 8:58 AM