Double IPA and a Barleywine in a Single Brew

I am almost out of beer. I know, right?  Down to the Pineapple IPA hopped with Citra and Mosaic. The club needs a barleywine for NCHF, the Northern California Homebrew Festival.  The missus DIPA. Can I make a barleywine and a Double IPA in a single batch?  Technically, a Barleywine and is a Double/Tripel IPA and a game of semantics.

So I modified my Phoebe Pry IPA recipe and a club Barleywine recipe to do a no sparge Barleywine and mash on the same grain bed with the IPA recipe.  I have done this before with an Imperial Stout and a normal Stout.  They came out great.   I wasn't sure if dark beer fare better with this method or not.

I separated the recipe ingredients in two separate buckets.  Milled separately and added a note to each to ensure I was using he right ingredients at the right time.  I started with the no sparge Barleywine.  using Beersmith software, I chose a Brew In a Bag equipment profile which is an easy way to calculate a no sparge batch strike water volume. I definitely nailed the strike temp at 154F adding 7.2 gallons of 170F water to the 12 pounds of grain for the 3 gallon batch. 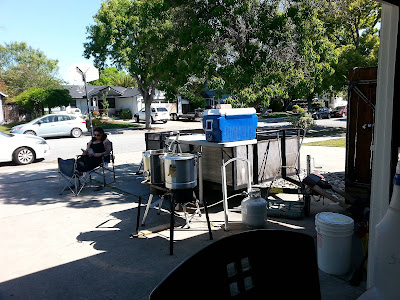 Now I had an hour for the mash before I would vorlauf 2 pints at a time, 10 times until the wort would flow clear.   So, it was time for some brew day breakfast; Triple decker fried ham and egg sandwich on a plain bagel cut into three layers.  Some beer mustard and spicy pepper jack cheese went well with my Chocolate Coconut Porter. 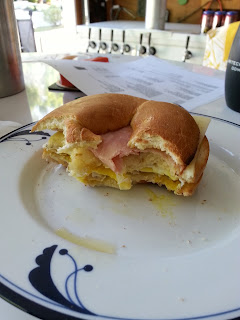 I transfered around 5 gallons of 13.2 BRIX wort which was 1.054 Specific Gravity.  A long way from my target 1.101 SG.  After 2 hours of boiling and several hop additions (Magnum, Cascade, Columbus) the boil was done an the gravity was 24 BRIX or 1.102 SG.  I transferred about 2.5 gallons into the 3 gallons fermentor at 68f.  I pitched a packet of Safale 04 dry yeast.

After transferring the Barleywine to the boil kettle, I added the additional 13lbs of grain to the grain bed and added 4 gallons of strike water at 165F hitting my smash temp of 146F.  A little over an hour later I sparged with another 2.5 gallons of 168F water and ended up with 5 gallons of clear wort in the kettle.  I was a little worried with the 14 BRIX pre boil gravity (1.058 SG) but after an hour oro so of boiling and adding magnum, Cascade and Simcoe hops I ended up with 3 gallons of 1.083 SG wort in the fermenter.

I pitched 2 vials of White Labs 001 yeast and rigged a blowoff for the high krausen yeast to drop into the Barleywine. The implementation was poor and was almost a disaster but worked well enough to get the happy yeast from the IPA into the Barleywine though there was a lot of leakage and cleaning still to do. 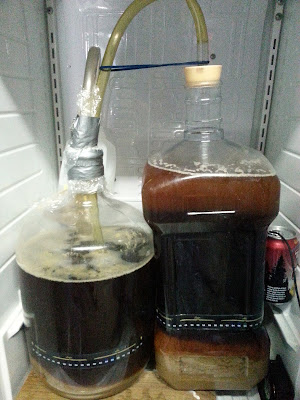 With a lot to clean and gnarly back pain, I took a break and had an intermission beer. 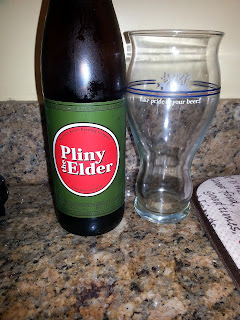 The barleywine finished at 1.021 SG for a final ABV of 10.8.  I dry hopped with an ounce of Cascade, an ounce of Amarillo and two ounces of Liberty hops.

The IPA finished at 1.011 SG for a final ABV of 9.5%.  I dry hopped with an once of Simcoe, two ounces of Cascade and an ounce of Amarillo.

Next up I plan to split a 6 gallon batch of Imperial Porter and finish with 3 gallons of Bourbon Vanilla and 3 gallons of Chocolate and something else.