I have been wanting to climb up El Toro for some time. I look longingly at it when we drive to Monterey and back. Today was the one day a year the trail is officially open. We got a late start arriving about noon. When we reached the landing just before the steeeep climb, we were advised they had removed the ropes that were setup for the morning climb. We had to go all macho and hoof it without the aid of ropes. Of course we were up to the task. After a short distance my lungs were laboring to get me enough oxygen. Luckily I was knee pain free and one of my companions was having a little muscle burn. Not something I was feeling but I got to rest along with him!

About 2rds the way up, my stomach was knotting up and not liking the climb. Again we rested. This time a little longer. Long enough for the queasy feeling to go way. I was clearly taking it too fast for my body to adjust. Still, I persevered onward. I had to keep my composure among the guys. No living down puking on the way up. Nope, never live that one down. We had just a couple more breathers before the summit. Instant relief. All was well. All was good. We rummaged around the summit taking pictures and looking for long lost survey markers. After chatting with other hikers, taking pictures, watching butterflies and admiring the view, we finally started our descent about an our after we arrived.

We took a new way down. One that was much more steep and much more treacherous than the way up. One must explore less we stifle our yearning for adventure! We adventured. I was well ahead of the guys. I just gotta go my pace downhill. Luckily I was in front. Lucky for the, There was a good chance at any moment I was going to slip on the loose sol and plunge down hill like a luge one ice. You really don't want me rolling down at hill at you. You really don't! The good news is that I didn't slip and no one was bowled over by an out of control mass.

Th last bit was some good conversation and call it a day. Two hours after we started. What a great hike! 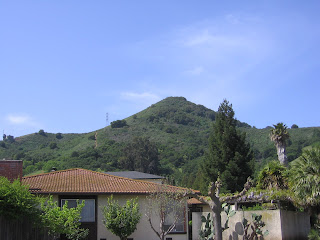 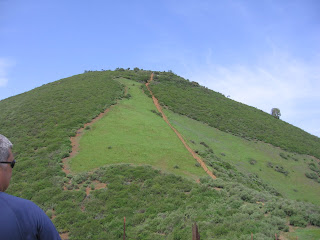 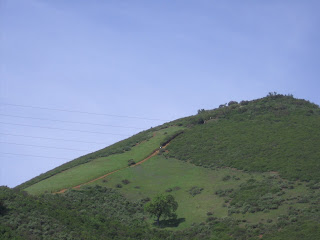 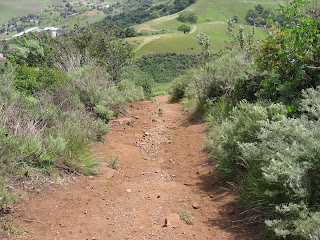